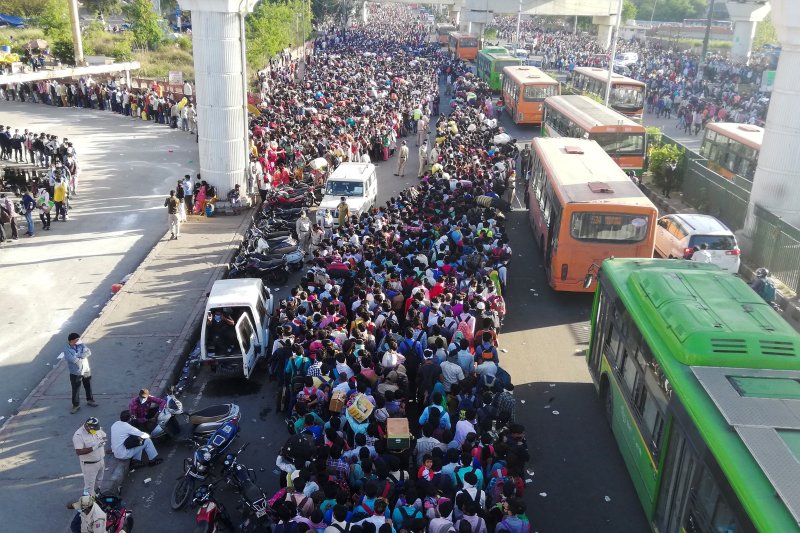 Prime Minister Modi announced a nation-wide lockdown on 25 March barely giving millions of Indians four hours to prepare for it. It turned out to be the strictest and world’s largest lock-down – which is not surprising given the size of India’s population (1.3 billion).

At least one Indian op-ed writer in a leading national newspaper was optimistic that the draconian measure might work. Writing a few days before the hastily announced lock-down, he observed:

With traditional, non-state safety nets still mostly functional, India is better placed than the West to face up to pandemics.

The esteemed op-ed writer must have rued the words he wrote after the lock-down triggered panic-buying among those who could afford it and, even worse, a mass exodus of migrant workers from India’s mega-cities. Given that all forms of transport were also shut down, the enforced migration back to the villages often occurred on foot as struggling workers and their families – after having suddenly lost their livelihoods – sought the safety and sanctuary of family and friends – watch this video which depicts heart-wrenching scenes of migrants desperately seeking to return home. More than 20 migrants paid the ultimate price by dying during their perilous journey. This number is pretty close to the deaths recorded in India as a result of the coronavirus pandemic. Paradoxically, the mass exodus simply heightened the risk of community-level transmission of COVID-19.

Modi offered an apology and tried to calm down a panicked nation, while authorities at all levels tried to cope with the awful, but unintended, consequences of India’s fight to vanquish COVID-19 by setting up soup kitchens and hastily erected quarantine facilities. A modest stimulus package geared towards the poor and vulnerable was also set up, but such efforts might be a case of too little, too late.

Could this potential human tragedy have been foreseen? Anyone familiar with the harsh structural realities of India’s socio-economic fabric could not have been sanguine about the consequences of a nation-wide lockdown.

India’s megacities rely heavily on migrant labour. They typically form a large part of India’s vast informal sector. They work as street vendors, cooks and cleaners. They toil away in small shops, factories and construction sites. For many of them, the ‘home’ in which they could engage in self-isolation might be a footpath, a floor in a work-place or a squalid, cramped room in an urban slum. Not surprisingly, a former Indian health secretary has observed:

Lockdown as a solution can be observed by the Indian middle class, which has regular salaries, a secure home space, and can afford the luxury of physical distancing.

As if to prove this point, one author from Delhi writes, with a huge dose of self-deprecation, how an upper-middle-class Indian twit would ‘quaff wine in comfort’ as he/she practices self-isolation and social distancing while the ‘poor are thrown to the wolves’.

Does this mean that countries like India should simply forgo any attempt to engage in lock-downs and social distancing measures to cope with a public health crisis? Should one invoke the notion of ‘herd immunity’ to justify this laissez-faire approach even if it means the large-scale loss of life? Should one adopt Brazilian President Bolsonaro’s view that Indians like Brazilians have natural immunity or should one emulate the proclamation of the strongman of Belarus and seek to ‘die standing’ rather than engage in large-scale social and economic disruption to cope with a pandemic? Modi, of course, did none of this – but his government could have been much better prepared to reduce the adverse consequences of a national lock-down on the poor and vulnerable. The state of Kerala has led the way in this regard and other Indian states have much to learn from this experience.

One thought on “India goes into lock-down to fight COVID-19: Is the cure worse than the disease?”