Where is the America we need?

It was not so long ago that the United States was enjoying its ‘unipolar moment’ as the world’s sole superpower. Communism collapsed and thus obliterated the Soviet Union. China was well on its way to embrace key elements of capitalism as part of its strategy to integrate with the global economy after decades of immiseration as an autarchy. The American political elite felt charitable and confident enough to accommodate the peaceful rise of China. Some declared an ideological victory by proclaiming the ‘end of history’. A US-led liberal democratic future was regarded as the only way forward after decades of fruitless ideological battles between communism and capitalism.

How the status quo has changed! It needed a pandemic like COVID-19 to bring the world’s sole hegemon ‘to its knees’. The world’s most influential nation now finds itself among the most ‘infected’, with over 20,000 fatalities. More such tragedies await an anxious nation led by a feckless leader whose administration bungled its response in dealing with a pandemic. While one is deeply saddened by current developments, what matters is what lies ahead. How the future of America evolves from here matters not just for Americans but will deeply affect the global community given the unique position of the United States in world affairs.

There are those who are doggedly optimistic that America is the ‘comeback nation’. In sharp contrast to this rosy narrative, some note with deep sorrow the death of the ‘myth’ that the US is the best country in the world.

As a leading scholar of international relations reminds us, COVID-19 and its lethal consequences on the American community have simply accelerated the fraying of the American model:

Long before COVID-19 ravaged the earth, there had already been a precipitous decline in the appeal of the American model. Thanks to persistent political gridlock, gun violence, the mismanagement that led to the 2008 global financial crisis, the opioid epidemic, and more, what America represented grew increasingly unattractive to many. The federal government’s slow, incoherent, and all too often ineffective response to the pandemic will reinforce the already widespread view that the United States has lost its way.

Others have speculated that…

As Washington falters, Beijing is moving quickly and adeptly to take advantage of the opening created by U.S. mistakes, filling the vacuum to position itself as the global leader in pandemic response.

The irony is that the pandemic originated in China whose initial missteps converted a local affliction into a pernicious global phenomenon. Yet, China’s assertive measures contained the crisis enabling it to declare victory against an epidemic and allowing it to act as a global citizen helping other nations in distress. The US administration has tried to pin the blame on China by depicting the pandemic as the ‘Chinese virus’, but this smear campaign has been unable to elicit any sympathetic and significant response from the global community.

The agenda of rebuilding the ‘America we need’ rather than the ‘America that we have’ is going to be long and arduous. Assuming that there is a change of Presidency in the November elections, deeply embedded inequities in the American socio-economic fabric would need to be tackled. Whether this crisis will lead to a ‘better America’ remains to be seen. After the pandemic is over, one might well witness a resumption of rapid growth, a resurgent stock market and (eventually) a buoyant labour market, but if it means replicating the deeply flawed structural features of the US economy, then the ‘comeback nation’ will not be the ‘America we need’.

OECD offers preliminary and grim estimates of the economic impact of COVID-19 as countries battle the pandemic with a range of containment measures. How soon countries will recover from such steep declines in output remains an open question. 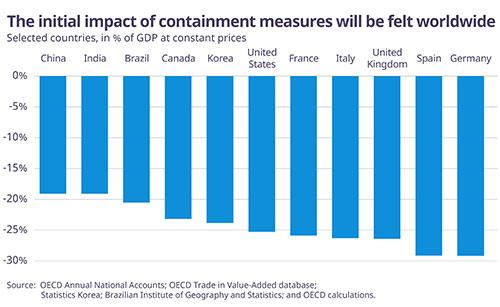 KEEP YOUR DISTANCE – BUT SHOULD IT BE CALLED ‘SOCIAL DISTANCING’?

Social distancing – along with such terms as self-isolation, quarantine, stay-at-home orders, lockdowns – have now become part of everyday conversation as governments across the world seek to cope with the COVID-19 pandemic.

Social distancing means keeping a safe distance (approximately 6 feet or 1.5 metres) from others and avoiding gathering spaces such as schools, churches, concert halls, and public transportation.

Yet, dissenting voices have emerged about the validity of using this term. Used in other contexts, social distancing has deeply embedded prejudicial connotations. In South Africa during the apartheid era, ‘social distancing’ of the privileged whites from blacks and the coloured community persisted for a long time. In the de facto caste system of India, social distancing between upper and lower castes is still prevalent. In general, social distancing is a time-honored means of marginalizing the ‘other’. In any case, social distancing as a term implies the severing of human connections that is so essential to one’s emotional and physical well-being. So, why use it in the context of public policy to respond to a global public health crisis?

Not surprisingly, this usage is beginning to change, albeit slowly. One analyst notes:

On March 20, the World Health Organization said it was officially changing its language. “We’re changing to say ‘physical distance,’ and that’s on purpose because we want people to still remain connected,” said WHO epidemiologist Maria Van Kerkhove announced (pdf) at the organization’s daily press conference. Singapore calls it “safe distancing.” Stanford psychologist Jamil Zaki suggests physical distancing or “distant socializing.” “’ Social distancing’ was the wrong term to begin with,” he said in this  Q&A on Stanford’s website.